A Brief History of the Circle of Wine Writers 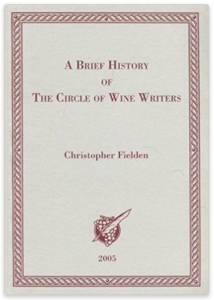 Thirteen years ago I was asked by the Committee to write a history of the Circle to celebrate, in 2005, its forty-fifth birthday. As far as I know this was at least the third time that this ship had been launched, but on the two previous occasions, it never reached its destination. The minutes of a Committee meeting ten years earlier record, “From the records we now have a skeleton of events in the Circle’s history. BJ (Brian Jordan) proposed we should now try to flesh out the bones with anecdotal stories and recollections from the comparatively few members who remember those days…” Money was voted for a lunch to milk the memories of a selected group of “oldies”. Whilst the lunch might have taken place, no history came out of it. Ten years later most of those “oldies” had died and I had to create a history out of what was available. Particularly galling was the fact that there was no trace of how it came to be founded, or of the first two years of its existence.

As a result of this the history, by its nature was brief and Jancis Robinson described it as “A good read for a long journey on the Underground.” Undoubtedly fair, but would you put this on the cover of any future editions? The Circle was the brainchild of Cyril Ray, whom I knew forty years or so ago, when he was probably best known as the compiler of the annual Compleat Imbiber. He was a committed socialist, but this did not prevent him from enjoying the fine things in life from his apartment in the Albany. Cyril controlled the membership very tightly; one member described it as “a club at Cyril’s invitation.”

One of the first decisions that were taken was that the Circle should not be open to anyone who had financial interests in the trade. On the one side this meant that Tommy Layton, who claimed at the time to have written more books on wine than anyone else, was blackballed, whilst Eddie Penning-Rowsell, the Chairman of the Wine Society was acceptable. Though there was some mutual antipathy between him and Cyril, André Simon was elected as the first President. The membership was eclectic. As I was told by one senior member, “There was an extreme political difference between Cyril (who was slightly to the left of Stalin) and André and his friend Harry Yoxall, who were to the proverbial right of Louis XIV.” Of these early members, only Julian Jeffs is still with us.

Despite the holes in the records, to mix metaphors, there was still some interesting flesh on the bones. In 1970, a piece appeared in the Atticus column in the Sunday Times, which was highly critical of the Circle, accusing many of the members of only being in it for the perks they could obtain. It appears that the article was as a result of some injudicious remark made by Pamela Vandyke Price – whose oft-repeated personal motto was “Prudent Be!” Names were named including those of Cyril and Eddie. Counsel’s Opinion was sought as to whether there was a case for a libel suit, but after Pamela said that her words had been taken out of context and much surplus steam had been exhaled on all sides, the matter lapsed.

In the early seventies, the policy was to limit membership to around sixty and this meant that greats such as Hugh Johnson and Oz Clarke were initially rejected. However at what must have been a quiet meeting in 1977, the Committee went through the membership list and decided that as many as a third were not active writers about wine and, shortly afterwards there were renewed complaints from the trade as to the excessive requirement of samples by certain members.

There then follows a gap in the records which came to be filled by the Circle’s first newsletter. Originally this appeared quarterly on roneoed, stapled A4 paper, edited by Pamela Vandyke Price. This existed until March 1991, when it was replaced by Circle Update. The June edition included an article entitled Let’s Get Paid, by Hugo Dunn-Meynell, on how publishers might be encouraged to pay their writers on time; just as relevant a topic now, as it was then. In the autumn of the same year, Oz Clarke entitled an article Champagne – who needs it? The Champagne Bureau’s response was a suggestion that he should no longer be invited to the region. This, in its turn, led to broad criticism from most of the important writers and to ridicule of the Champenois in the national press. And so on…

I would like to think that this slight work gives a picture of the Circle as it was; expanding from being an exclusive club to the days when it began to absorb further propagandists for wine, such as educators, photographers and now bloggers.

A brief history of the Circle of Wine Writers was printed in a limited edition of 750 copies, individually numbered. These are still available to members at the administrator’s office.