Michael Broadbent was one of the wine world’s best-known personalities, having worked for over 60 years as an eminent author, critic and auctioneer. A fastidious note-taker, Michael began writing his wine notes in 1952 and wrote over 90,000 wine notes in his lifetime – all of which were kept in red notebooks – including many notes on historic vintages that have rarely been tasted by any other critic. Many of those notes were used to write his Vintage Wine book, which is still highly revered in the industry today and includes tasting notes of wines dating back to the 17th century. In 1960 he became a Master of Wine, and in 1966 he started fine wine auctions at Christie’s – a role which he soon became famous for. Members pay tribute to the late Michael Broadbent, who passed away on 17th March aged 92, and Jancis Robinson MW leads with an obituary. Michael Broadbent is an Honorary Life Member of the Circle of Wine Writers.

“John Michael Broadbent was born on 2 May 1927 in the West Riding of Yorkshire where he was educated. He came to London during the war to study as an architect, and his skill as a draughtsman was consistently displayed in his role as chairman of the Wine Trade Arts Society, which he founded as early as 1954. He was also an enthusiastic collector of drawings.

He admitted, ‘My lengthy architectural training was interrupted by military service [national service immediately after the war] and ended through sheer idleness. At the age of 25 a drastic change was called for.’ His mother spotted an ad for a wine-trade trainee placed in The Times by the late Tommy Layton, and spent a happy, if impecunious, year sweeping the cellar and delivering orders around Mayfair, followed by a year or two working in a wine shop. A move to Harveys of Bristol, then Britain’s leading wine merchant, where the late Harry Waugh trained a generation or two of gifted wine professionals, saw Michael become, inter alia, brand manager for a liqueur chocolate for which he suggested the slogan ‘the best liqueur chocolate is the one that makes you drunk before you are sick’. Most of his responsibilities at Harvey’s were more wine-related and he was able to qualify as a Master of Wine in 1960. The 11 years at Harveys gave Michael sufficient credentials, and confidence, to approach Christie’s and suggest that he started a wine department for them – at a time when none of the big auction houses dealt in wine.

He worked himself and his staff incredibly hard. He was never a particularly accomplished auctioneer. He left that largely to Alan Taylor-Restell, whose family auction house in the City of London was absorbed into Christie’s, and David Elswood who died, far too early, last year. Michael did the high profile stuff, and tirelessly investigated and packed up cellars, generally with Daphne and often with his children. Their daughter Emma would go on to become one of Britain’s most eminent judges and wife of Tory grandee Lord Arbuthnot. Their son Bartholomew (Bollew) runs Broadbent Selections, a respected wine importer in the United States with a portfolio that includes many of his father’s oldest friends.

The elegant Michael really drove himself, becoming chairman of the Institute of Masters of Wine in 1971. He was president of The International Wine & Food Society from 1985 to 1992 and chairman of The Benevolent, the wine trade charity, for a year from 1991 immediately after his year as Master of the Distillers livery company. The Vintners’ Company made him an honorary freeman in 2001.

Michael also set up Christie’s Wine Publications, publishing a series of well-designed monographs in the 1970s and 1980s that are still useful today. In 1982 with Steven Spurrier he founded Christie’s Wine Course, an early foray into wine education. He was to be the first honorary president of the Wine & Spirit Education Trust in 2008.

I feel exhausted just recording all this frenetic activity, especially when I know how hectic his social life was. There were few free evenings for Mr and Mrs Michael Broadbent.

Life calmed down a bit after Michael retired from running Christie’s wine department full time in 1992. He was a director of Christie’s International until 2007. There was such fierce rivalry between Christie’s and Sotheby’s wine departments, fostered it has to be said by Michael, that this may have been a factor in his misguided decision to accept the German collector and counterfeiter Hardy Rodenstock’s notorious Jefferson bottles without a proper record of their provenance. This saga was chronicled in The Billionaire’s Vinegar, written by Benjamin Wallace, whom Michael, typically, entertained at Brooks’s, where, I would guess, the auctioneer may well have been too loose-lipped for his own good.

He and Daphne spent their latter years in a pair of adjacent flats – one for work, one for entertaining – high above the Thames in Fulham overlooking the Barnes wetlands. The River Café was one of his favourite haunts once Daphne was no longer there to look after him. My fellow wine writer Jane MacQuitty lives nearby and was very good at keeping an eye on the senior widower until he moved permanently to a cottage in the grounds of the Arbuthnots’ house in Berkshire.

Many wine lovers around the world will feel they know Michael best through his monthly column in Decanter magazine, illustrated with a photograph of a jaunty JMB on his beloved bicycle. He was extremely proud of being the longest contributor to that publication, from 1977 until 2012.

As well as wine, he loved women and gossip, which made him great company on the long journeys on the Piccadilly line we shared returning from Heathrow when, with Hugh Johnson and Colin Anderson MW, we chose wine for British Airways on the basis of blind tastings. Times long gone.

His long-suffering and highly opinionated wife Daphne, who transcribed so much of what was in those red notebooks, died in 2015. It surprised no one when last year Michael married again, the glamorous Valerie Smallwood, widow of fellow Master of Wine Simon Smallwood, who did so much to ease his final years when he lost full mobility. They put their considerable respective cellars together to host the grand November 2018 dinner at Brooks’s.

He leaves the most magnificent legacy and many of us would be much poorer wine tasters without his magisterial lead.” 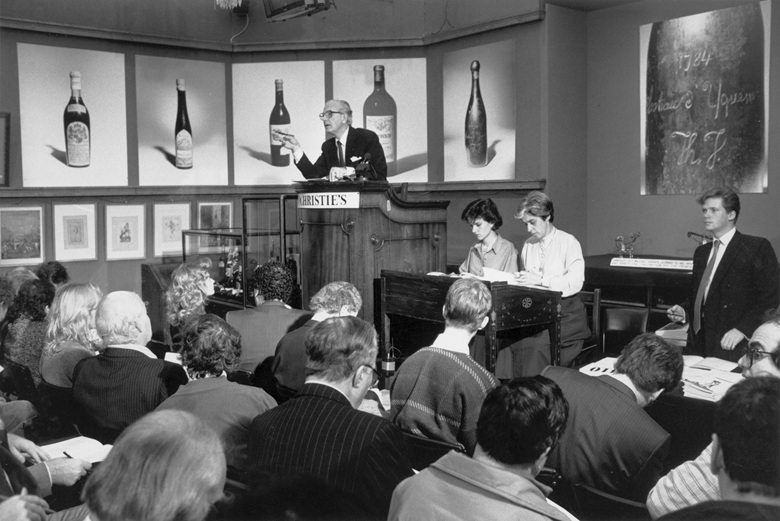 “I first met Michael, in 1957, when he was working for Harveys of Bristol and I was a salesman for Sichel & Co. for the West of England. He has been a firm friend ever since and I mourn his loss. I was fortunate enough to share a magnum of 1870 Château Lafite with him, which he discovered at Glamis Castle. He considered it his greatest find.

When the affair of the Thomas Jefferson Bottles of 1784 and 1787 became news, involving Bill Koch, the late Hardy Rodenstock, who never confirmed exactly how many bottles there were, and Christies, Michael came under criticism for auctioning bottles that were thought by some not to be genuine and that many believed were fraudulent. Michael believed, and has always continued to believe, totally and viscerally, that they were genuine. He spent a great deal of time, money and energy trying to prove beyond doubt that they were NOT false.

He sent me all the way to Virginia, USA, to the Jefferson Library, in Monticello, to spend two wonderful days researching all Thomas Jefferson’s correspondence of the period, before during and after 1784 and 1787. The closest that I could come to helping was a letter to a supplier insisting that the corks be covered with “concrete”.

He went even further. He borrowed one of the famous bottles from the English Rothschild family (who insisted on a colossal insurance) and flew to Bordeaux with it together with his wife, Daphne. We had made an appointment with Professor Philippe Hubert at the  Centre Etudes Nucléaires de Bordeaux, Gradignan (Centre of Nuclear Studies). Professor Hubert is one of the people who analyse particles brought back from space. He also tests great bottles (36 bottles of Château Margaux 1945) for authenticity. Together, we put this precious bottle on a particle accelerator and held our breath. Thankfully, it came out intact at the other end! We were able to analyse and date the glass, but were no further forward with the wine, and the problem was that in those days they re-used the bottles repeatedly, so the date of the glass was no proof of anything.

None the less, Michael was happy that there was nothing to prove that it was false, and the bottle was still intact. His next project was to visit a world-renowned engraver, but it was now lunchtime and Michael, Daphne, the Professor, my wife and I went off to lunch and drank my last bottle of 1961 Latour before my wife and I put them on the home flight for more research.

I have since seen one of the bottles, which is lying in the cellars at Château d’Yquem. Michael also recounted the story of the bottle bought at Christies, for the then record price, by Malcolm Forbes, £105,000). It was taken back to the USA by Christopher Forbes and put on Thomas Jefferson’s dining room table with a spotlight trained upon it. Michael got a phone call at home in the middle of the night and an unannounced voice croaked, “it’s broken”. Michael elicited the fact that the precious bottle had broken from the heat of the spotlight and when asked what to do about it said, “go back to sleep and mop it up in the morning”.

“I remember in the very early days of the Christies Wine Auctions I was successful in buying many lots of old Sauternes. After the last successful bid, Michael announced if I would be inviting him for dinner to taste some of these gems.”

“He was an extraordinary man, and a huge power for good in the wine trade.”

“Michael was not only a great personality but a genuine wine lover always keen to help younger people like me coming into the trade. We stayed friends and he very kindly found time to write a superb Forward to my book Hungary: Its Fine Wines and Winemakers. Largely thanks to him the book was shortlisted for the Louis Roederer International Wine Book of the Year Award.

I asked him because I knew of his interest in Tokay. He told me that when he took over at Christies and studied the back history he saw that Tokay often achieved higher prices at auction than Burgundy and Bordeaux. He came to like it so much he bought (at auction) a bottle of the celebrated Comet 1811 Vintage of Esszencia and shared it with Daphne on New Years Eve 1972.

1972 figures in another anecdote. Some time in the 70s my good friend Nick Clarke MW had been appointed wine buyer for Bass Charrington Vintners, a large and regular buyer of top clarets. Nick confided he almost got sacked because a Board Member couldn’t believe he hadn’t bought any Mouton Rothschild 1972. When Michael sent me a copy of Great Vintages I looked up his comment of Mouton 1972. It said; ‘Wishy washy. A spurt of characteristic blackcurrant, but like an ugly sister danced by Robert Helpman.’ That was Michael to the dot. Short. Apposite. Witty and original. May he rest in peace.”

“Michael was unashamedly a man of his era, he was gracious and witty, a stickler for detail, an entertaining raconteur. He had a more substantial tasting experience of old and age-worthy wines than anyone else in the second half of the 20th century. Many of the styles of wine he celebrated have changed or vanished… He was probably the last direct link to these wines: his life in this arcane segment of the wine world just overlapped with Andre Simon. Both served as mentors and reference points for the next generation of experts.”