Liz Sagues interviews Santiago Mora Poveda, director general of Rueda DO, the denominación de origen that makes more white wine than any other in Spain, on the region’s recently revamped rules. Liz was inspired to arrange the interview, which is a Circular exclusive, after enjoying the Circle’s ‘Let’s talk about Ramón Bilbao in Rueda – Verdejo and Sauvignon Blanc’ with Sara Bañuelos, the company technical director.

Winter is starting in Rueda. It’s cruel. Bitter winds blow unrestricted across the wide, high, undulating plain. Rain slants horizontally, making even these pebbly soils too slippery for visiting wine writers to be taken to see the oldest vines – the venerable bushes planted before phylloxera ravaged Europe’s vineyards. If the climate is changing, it’s not obvious on days like this. But there is change in Rueda, the denominación de origen that makes more white wine than any other in Spain. The DO rules have been shaken up, creating a blend of new categories and simpler specifications for the principal dry white wine. Santiago Mora Poveda, director general of the regional regulatory board, is optimistic that they will bring Rueda new recognition and new respect, worldwide.

A little background: Rueda is the home of the Verdejo grape, thought to have been brought to Spain from North Africa, perhaps as early as the 11th century and rarely seen in any quantity elsewhere in the world. It is in its element on the high Castilian plain, where those cold winters give way to hot, dry summers. Sturdy and disease-resistant, Verdejo has distinctive scents and flavours: the citrus fruitiness takes on a herbal edge, the finish has a light, food-friendly bitterness, and the big diurnal temperature range keeps acidity up. Overwhelmingly, it is the main grape – some 88% – of a region where white grapes cover all but 440 of the 18,000 hectares of vineyards, providing more than 99% of the harvest and 99.7% of the 92.8 million bottles produced in 2019.

In 1980, Rueda became the first DO in the Castilla y León region and the first for white wine in Spain (where red dominates nationally, with almost 70% of production), and it just heads Ribera del Duero as the second-largest DO, volume-wise. Rioja, of course, is the biggest. The designated production area, mostly at a height of 700-800 metres, sits between Toro and Ribera del Duero; the Duero river forms much of its northern boundary. Its towns and villages are small, with the nearest big centre Valladolid, which claims the title of tapas capital of Spain. Having enjoyed some of the remarkable creations there, any rival for that crown faces a big challenge.

Returning to the new wine rules, announced late last year – from the 2019 vintage, the previous three dry white categories, Rueda Verdejo (at least 85%), Rueda (minimum 50% Verdejo) and Rueda Sauvignon (at least 85%), have been merged into a single Rueda denomination, of whatever grape mix producers choose – provided at least 50% is Verdejo and/or Sauvignon Blanc. The new back label has no mention of grape variety. Sauvignon, second in the grape popularity league, appears alone or blended with Verdejo. Chardonnay and Viognier have been allowed under the new rules; Viura, Verdejo’s favoured partner for the second half of the 20th century, is being edged out; and once-popular Palomino Fino can no longer be planted.

Won’t this new flexibility mean that the international varieties will start to overwhelm Verdejo, I asked Santiago, during our Zoom discussion. His reply was an emphatic “no”. “Actually, the increase in the production of the Verdejo grape has been very important in the last years,” he continued. “New plantations of Sauvignon Blanc have not been so important.” For the next three years, no new vineyard planting at all is allowed in the region, existing approvals excepted. Verdejo will, Santiago stresses, remain the essential grape of Rueda. “We are not going to lose the individuality of Verdejo,” he insisted. “It is a different grape, a unique grape. We are still trying to discover its potential. Its versatility explains its thousand years of existence and it is important to respect history and give value to tradition.”

The versatility of Verdejo

As for the grape’s place in the 21st century, he points to its ability to flourish in an extreme climate, the generations of experience Rueda growers have of handling it well and their adaptation to modern winemaking practices, especially mechanical harvesting at night and squeaky-clean cellar conditions. “Consumers like Verdejo, they are convinced of its quality and they are asking more and more for different elaborations,” said Santiago. Those include fermentation and ageing in oak barriques of varied origin, larger barrels and foudres, or in concrete tanks or eggs, more time on lees, and blending experiments. The resulting wines can be very impressive and excellent value – a clear, age-worthy step up from the fresh, aromatic but sometimes simple entry-level offerings.

There are, from this vintage, two new dry table wine categories. Vino de Pueblo allows a village name to appear on the bottle, provided at least 85% of grapes come from that location. Above it comes the new premium classification, Gran Vino de Rueda. Here, the vines must be at least 30 years old, the yield lower than 6,500 kilos per hectare and only the best two-thirds of the juice used. The aim is to raise Rueda’s profile both domestically and internationally, but there is another purpose too. “We have very old vineyards, with extremely low yields,” Santiago explained. “We have to give to the growers the possibility of making these vineyards more profitable. It is very important to build this new classification because it will give more value.”

The variety of winemaking now practised in Rueda will appear in these wines as well as in lower classifications. “The ways to create a Gran Vino de Rueda can be different, the importance is the result that should convince the final consumer that it really is a Gran Vino de Rueda.” So the focus of the regulatory board, Santiago continued, is “on education, education, education” in the key export markets, which will include the UK, the US, Switzerland and Germany – countries with a serious restaurant culture and consumers ready to pay the prices fine white wines attract.

The emphasis will not be on volume sales of the Gran Vinos, the first of which will be released next spring, but on ensuring they are seen in the right places. There, he hopes, wine journalists, top critics and influencers will be able to spread the word. Within Spain, Madrid and the Basque Country will be important targets, in an effort to win over drinkers who in the past have been reluctant to choose expensive home-produced white wines. “Consumers at this level are growing. The previous Spanish market didn’t appreciate top wines, and if they don’t appreciate they won’t pay.”

Santiago has been delighted by the support for the premium classification among the appellation’s 77 wineries, which process the grapes from 1,580 growers: “More are pushing for quality and most want a Gran Vino.” These, he expanded, will form the top of a pyramid of Rueda wines that is changing shape, its slopes steepening as the lower-priced wines which previously formed the broad, flat base are joined by more and more quality wines.

Also in the pyramid are two dry, fortified, solera-aged wines, very much reflecting the respect for Verdejo’s history that Santiago believes is essential to maintain. Dorado is the modern expression of a regional classic in which the traditionally-made wine, once dosed with grape alcohol, is left exposed to the sun for months in demijohns before at least two years’ barrel ageing. It’s rare, and very special, sharing something of the character of a fine dry Madeira. The other, Pálido, is the revival of a lost style. Aged biologically (like sherry), it must spend at least three years in barrel before release. I’ve yet to taste it, but I suspect it too will be a treat. Both can be made from Verdejo and/or Palomino Fino and must have a minimum of 15 degrees alcohol.

Clearly, for any wine region that wants worldwide recognition, wines of the quality aimed for in the Gran Vino designation are essential. But there is, I believe, something of a hollow between the catch-all Rueda appellation and the Gran Vinos. A lot will depend on how much support Vino de Pueblo gains and how the category develops, though at the moment it excludes many of the excellent, value-for-money wines that are a step up from the entry-level bottles. There surely needs to be a way to differentiate these, to raise awareness of the quality of wines that have a huge opportunity for progress on the world wine stage.

Changing topic, I asked Santiago how Rueda is reacting to the current importance of sustainability in wine production. “Organic is a category that is increasing so much, especially in the international markets,” he acknowledged. “We have an important advantage to convert our vineyards to organic: the almost absence of illnesses in the plants because of the normal low quantity of water we receive in Rueda every year.” Some Rueda promotional activity in European markets will aim to raise the visibility of organic wines, and the regulatory board will support growers, he added. There is also increasing use of natural yeasts, and some hesitant steps towards biodynamics. “We will see how it works.”

Rueda has a long history, and change can be stopped abruptly by the force of tradition. But the current generation of producers are adept at moving on, as the adoption of modern winemaking practices has confirmed. The future looks intriguing. Santiago is optimistic. With a smile, he quoted a favourite statistic, that more than 55% of people who taste Rueda wine become converts to drinking it regularly, the highest rate in any Spanish DO. “Our challenge now is to maintain and even surpass the present quality.”

● Another of the new rules allows sparkling wines to carry the words ‘Gran Añada’ (excellent harvest) when the production process, from pressing to disgorging, exceeds 36 months. The vintage must also be shown.

● Change comes too for the tiny amount of Rueda red and rosado wine – Syrah joins the list of permitted varieties, with Tempranillo, Cabernet Sauvignon, Merlot and Garnacha.

● Currently, some 15 per cent of Rueda production is exported, with the Netherlands, Germany and Switzerland the major markets. Exports to the UK have dropped by two-thirds in the last five years, though it remains the number five destination in Europe, behind the top three and Belgium.

● The forecasts for the 2020 vintage are promising. “Wines of great aromatic intensity and with good structure on the palate are expected,” reported Jesús Díez de Íscar, technical director of the DO, as harvesting ended. “The grapes have entered the winery in optimal conditions. The balance that we find between acidity and alcoholic strength promises wines with a greater longevity.” Perhaps 2020 will be the third vintage in the last decade to be rated ‘excellent’.

● More information is available at: www.dorueda.com Be prepared to be patient, and revise your Spanish beforehand.

● A recording of the webinar with Sara Bañuelos of Ramón Bilboa is available through the Circle YouTube. 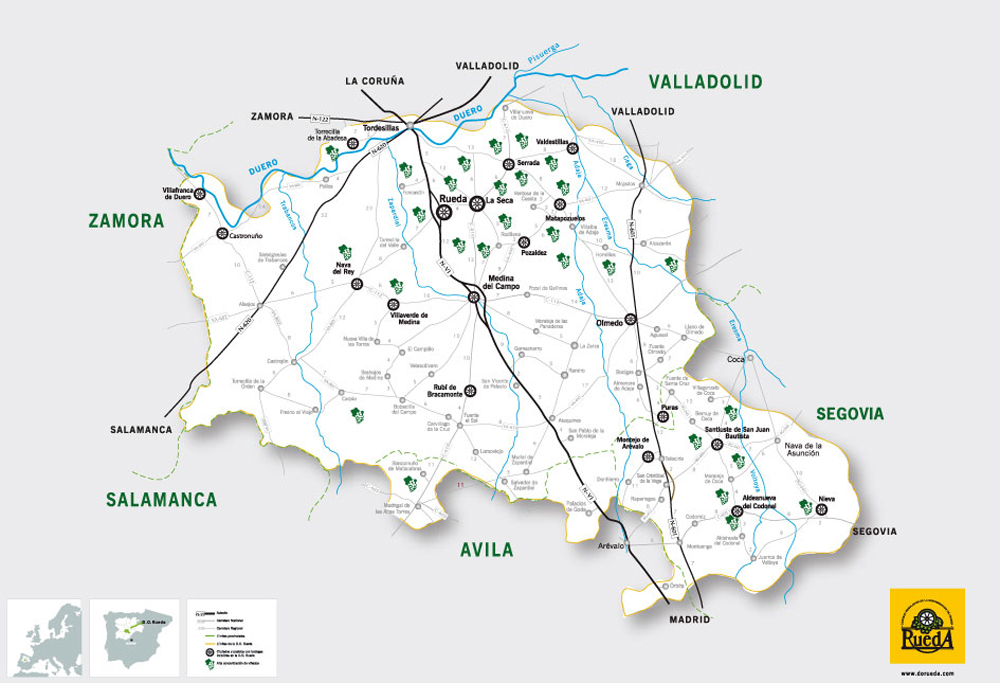