Richard Lane describes what it’s like to be the WSET’s first blind student. A version of this article was originally published at JancisRobinson.com in July 2019.

My first semester of the Wine & Spirit Education Trust‘s Diploma is over, and it’s time to draw breath, while continuing to educate my palate. Being blind, unable to read wine labels, struggling (sometimes) to read articles and books about wine with the often-mercurial voice-based technology that most blind people use, wine education is not, despite the obvious aspect of using one’s nose and tongue, the easiest world to wander into without sight.

Looking back, it was only four years ago when the world of wine started to open up to me, after I joined the Wine Society, with the artificial voice on my smart phone reading back to me their many exciting wines available from across the globe. Soon afterwards I joined the WSET level 2 programme and spent many happy summer evenings in 2015 getting myself better acquainted with the brave new world of wine. A few months later I enrolled in the intensive five-day WSET level 3 programme and, barring a tasting hitch over a white wine which to this day I am convinced was definitely not a supermarket Pinot Grigio, would have finished with a very good outcome, although a Merit seemed reasonable. But Diploma? Surely not. 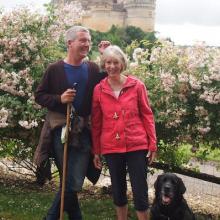 A recent sabbatical year in south-west France with my wife Liz and guide dog Topper kept my palate alive, albeit in a rather narrow Bergerac–Bordeaux kind of way. Living briefly in France was a joyous experience, but I found myself longing to rejoin the wider wine world. Around Bergerac, Alsace and Burgundy felt as far away as Mendoza and Marlborough. The WSET London School were interested to know how I was getting on, and invited me to run a tasting masterclass on the wines of Bergerac upon my return last autumn. This was huge fun, and was followed up a few months ago with my first take on Languedoc, based on several trips there during our sabbatical.

So, one of the first things I did after returning home last autumn was to enrol in the WSET Diploma programme. It was inevitable, with my thirst for more wine knowledge and having lived for a year in a glorious wine region. Every time I have learned something, be it in a WSET programme, or from talking to a vigneron in their chai in south-west France, I have always wanted to know more. Why the clay maturation casks at a local Bergerac vineyard? Why the need to hold on until fruit has potentially 15.5% before picking? Why is the parallel phenolic maturation and acidity so important? Questions, questions, always more questions. The more I learn, the more I realise I do not know, increasing my deep desire to learn more. The acquisition of a wine education is all about being a perpetual student, it would seem.

And then there is the reality of how to study for something serious like the WSET Diploma in one’s early 50s – no great age, but three decades have passed since my university finals. And then there is how to navigate the programme blind. As ever, like life itself, there is an inevitable series of barriers and challenges, all to be broken down.

Firstly, I could have waited until August 2019 before starting Diploma studies, when a new, modernised, online and electronic way of studying WSET programmes was introduced, probably easier for a blind person than having to work from a print-oriented syllabus. No matter. Semester 1 is over, and has been achieved by the usual hard work that any Diploma student would have to undertake: hours of reading, both core texts provided by WSET and converted from inaccessible pdf into beautifully laid out text and Word documents from WSET’s transcription team, namely Sara Hobday.

Sara has cheerfully ensured that all core course documents have been delivered to me electronically in formats that my computer’s screen-reader Jaws can cope with, including audio files recorded to describe information that appears in tabulated form – something that Jaws just cannot read back in any logical way. By listening to Sara’s voice on an audio file I managed to remember the different characteristics of American rootstocks, just in time for the first exam of the Diploma programme. Head of Diploma at WSET, Russell Dent, was very supportive when, after hearing in class and reading online about different and complex trellising systems in the vineyard, I found myself stumped. I needed to visualise what a Geneva Curtain set-up looked like, compared with the Scott-Henry or Smart-Dyson versions. Canopy management in the vineyard is much easier to understand when you can visualise it, and Russell’s descriptions over a 20-minute phone call were instructive. Although my sighted days are far in the past (I became totally blind at around 24 years of age), visual memories and imagined visual constructs still have a useful role to play.

How to keep up on appearances

Wine appearance, of course, is a 100% sighted activity, and is part of every WSET tasting exam. This has been a challenging problem to resolve, requiring a reasonable adjustment from WSET’s Examinations Board to ensure that I would not be at a disadvantage by not being able to assess wine appearance (which accounts for two marks out of around 20 in every tasting sample). Thanks to support from tutors at WSET London, a compromise was reached just before my first tasting exam, on fortified wines. Rather than being given no descriptive information at all (the status quo at Diploma outset), it was decided that the examination invigilator could inform me as to the basic colour of the wine: red, white, rosé, or none of these, but not a nuanced description. I worked hard memorising the appearances of all the various fortified wines on the syllabus, so that if my nose and palate was leading me towards a Malmsey madeira, my brain would recall the appropriate nuanced visual descriptor (medium brown). Imagine my surprise when the invigilator of the fortified wines exam informed me that all three tasting samples were red. This limited the field considerably, and having discounted the red fortified VDN Maury from south-west France, I focused my mind on all matters port.

As I cannot realistically use a pen or pencil, all study and exams are done by touch typing on a computer, with Jaws telling me in a rather robotic electronic way what is on the screen. I take my exams away from the other students, at WSET London offices in Bermondsey, where I am permitted an extra 50% of time, invaluable as it always turns out, as the first few minutes are spent calibrating Jaws to read properly. Jaws can behave very oddly from programme to programme, and the Jaws settings on the college’s laptop, which I have to use for exams, are usually very different from my own. I like the voice to read fast, as 25 years of blindness and two decades working as a journalist and editor at The Lancet medical journal have necessitated a rapid reading of material to formulate my thoughts before I start typing. Jaws reads back every word as I write. I use arrow keys on the keyboard to review lines or paragraphs of text, and if Jaws doesn’t correct my spelling errors, the spellchecker in the word processor should take care of it.

Another enduring feature of classroom Diploma study has to be the camaraderie and support of my fellow students, most of them younger than myself, and many of them native to continental Europe. They have filled and washed my tasting glasses, emptied my spittoon, and guided me around WSET with great warmth and friendship, making classroom study feel as normal as possible. Our inevitable WhatsApp group has also been an invaluable source of support, especially in preparation for the last exam in which we tried to make sense of the topical, if not particularly satisfying, area of the growth in the low- and no-alcohol beverage market. I still have a de-alcoholised bottle of Tempranillo in my basement office-cum-tasting room. I fear it will remain unopened. The less said about these ‘wines’ the better.

My sights are set on becoming a wine educator, assuming I make it through Diploma studies unscathed, and preliminary discussions with the WSET and my brief experiences of running tastings suggests this could be an exciting future career path, combined with wine journalism, I hope. I am not aware of any blind people currently working in the industry, although I would love to hear from them if they are out there. But as with so many aspects of life, success comes down to mind over matter. A positive attitude and a supportive environment can break down those barriers that sometimes seem immovable. It may be only half time in my diploma studies, but the glass is very much half full.