The Circle of Wine Writers has some of the famous faces of the wine trade on their roster. It was a genuinely proud moment when I was accepted to the Circle for what I considered to be my meagre, poorly spelt rantings on my way through the world of wine and spirits. It’s also a sense of pride when you see other members doing well and last week, at the launch of “The Three Drinkers Do Scotch”, three of them, in particular, have done themselves, and the rest of us very proud.

Our very own Chairman of the Circle, Colin Hampden-White and his good friends and fellow Circle members, Helena Nicklin and Adrian Smith, have filmed a web series charting their journey across Scotland, dram in hand, and smile on the face. On the face of it, it looks like an absolute jolly for three mates who like their tipple. But that is no easy feat.

As wine communicators, we each have an audience that we speak to. Whether it be a presenting style, a writing style, or a particular area of interest, you slowly get to know your niche. So where would you even start to place a video, shown on Amazon Prime no less, with a potential reach of millions of viewers across 90 countries and growing? I’m not sure “niche” is the right way to go.

What they’ve gone for is Top Gear meets Whisky. Three mates apparently jollying around Scotland from whisky-related caper to whisky-related caper. The unscripted nature of the filming makes for easy watching and a relaxed mood throughout. It’s not preachy, but there’s enough packed into each of the 30-minute episodes to keep the interests of even people who (like myself I suppose) feel they already know their way around a dram. 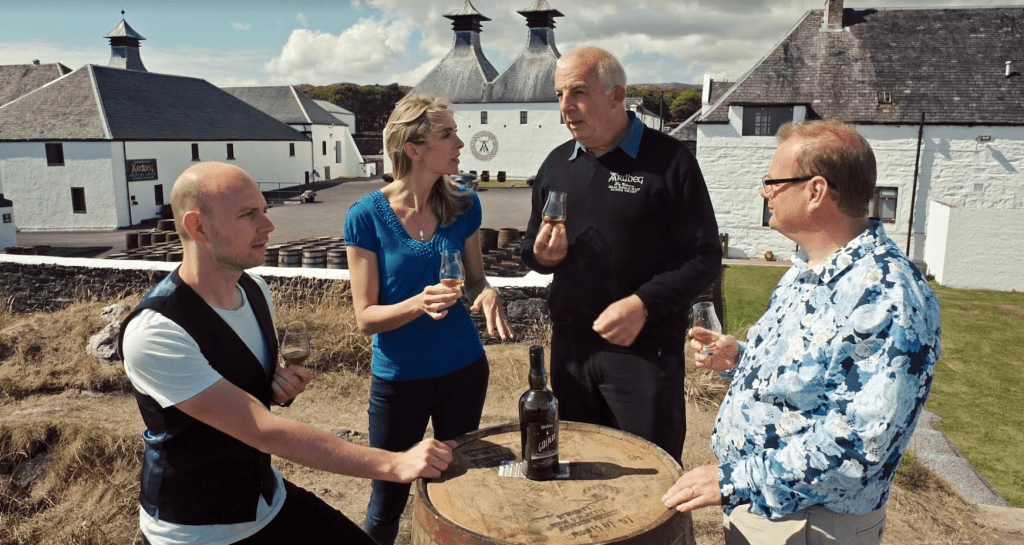 As I said, that’s not easy. Eighteen hour days of filming were not unheard of. Luckily, the professionalism of the crew (most coming from their usual day job of producing The X Factor) and the closeness of friendship between the three presenters kept tantrums and strops to a bare minimum. Only if Colin couldn’t get food apparently. Maybe taking the Jeremy Clarkson thing a bit far there, Col!

Above all though, I’d encourage my fellow members to watch it in support of the three of them. Our love and enthusiasm for wine and spirits is not easy to transfer onto video, and any attempt to do it should be encouraged and nurtured. Give them your opinions, give them your advice, but above all bring them your support. I hope we’ll all do just that.

The Three Drinkers three-part web series is available to watch for free for subscribers of Amazon Prime.