During judging at the Michelangelo Awards competition, Michèle Shah took time out to visit to the Old Vine Project in Stellenbosch, where she witnessed the wonderful work of André Morgenthal and Rosa Kruger.

Being based in Stellenbosch on my recent visit, the traditional heart of the South African wine industry, presented a great opportunity to meet up with André Morgenthal and Rosa Kruger, who started the search and documentation of old vines, consequently founding the Old Vine Project in South Africa.

My acquaintance with André goes back a number of years – since when he was communications manager for Wines of South Africa (WOSA), so it was especially nice to reunite and experience his passion and dedication to the old vine heritage. While I had never met with Rosa Kruger, I had read about her and seen her on video presenting the Old Vine Project and had formed an idea of a feisty, fearless Afrikaans mevrou (lady), fired by a determination and enthusiasm regarding her mission to save the old vines. Meeting her in person was even more inspiring.

Rosa’s strong personality and dignified presence are perceptible, as is her conviction and confidence.  As we walked among the vineyards I watched her interact with them and I could almost picture her ‘whispering’ to the vines. Rather than dominating nature, her viticulture philosophy is to follow nature and plant accordingly as closely as possible.

I was especially excited by the opportunity to join Rosa and André on a field trip to see how they tend to the old vines, and was particularly interested in the pruning method they use. It was really inspiring to bear witness to part of this project, which was officially launched in 2016. Today, they can proudly boast some 130 members and 250 Certified Heritage Vineyards brands.

One special experience was visiting the two old vineyard blocks in Stellenbosch. We first met up with Sofie, who had recently graduated from the pruning course that she had taken with the Old Vine Project. She was leading a group of farm workers, who were pruning Ken Forrester’s FMC Chenin Blanc block. I was impressed with Sofie’s knowledge and skill, knowing which shoots to cut away and which to keep in order to sustain and strengthen the plant. As André explained to me dealing with old vines is like taking care of old age pensioners. “It’s all about ‘planting to grow old’ and in the pruning we need to make sure the plant is not overloaded, that it is nurtured and sustained in order to age gracefully,” he said.

We then met with Frik Kirsten, who owns the oldest Chenin Blanc plot in South Africa. Eben Sadie tends to this block and vinifies the grapes for his Mev Kirsten label and here Rosa explained how they manage the soils for old vines by planting cover crops in between the vines to maintain and enrich the soils with natural nutrients.

From these two brief vineyard visits, I was able to catch a glimpse of a sustainable model of viticulture that not only takes nature into account, and the concept of ‘planting to grow old’ as Andre says, but also that of empowering the farm workers with the necessary skills and knowledge of how to interact and preserve such a heritage. As weather extremes become more commonplace, and this also applies to the drought in the Cape winelands, the belief that old vines have a crucial role to play in the future of the wine industry struck me as a very real one. Just like Rosa and André said: “We can learn so much from them, they hold so much wisdom.” 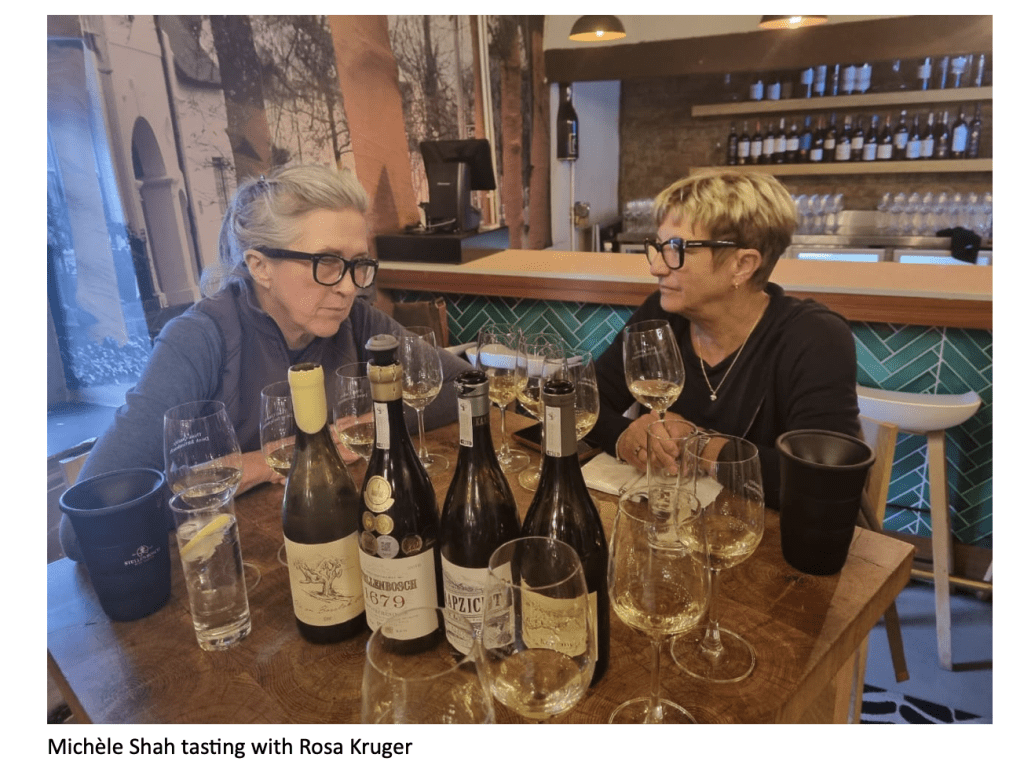 Back in Stellenbosch, we sat down to a tasting at Simon Wine Emporium at De Warenmarkt, a beautiful, old building with loads of atmosphere and a good collection of local fine wines, in addition to a selection of wines from Stellenbosch-based Old Vine Project members. The tasting mainly featured wines made from old Chenin vineyards and for me it was one of the highlights to taste some of these old beauties. On all accounts it was a very entertaining afternoon and clearly both André and Rosa’s passion and dedication to the Old Vine Project came across loud and clear. Each wine and vine had a story to tell, and my favorite was the vine that was uprooted and replanted! The vineyard was Die Ou Bosstok, a 1 ha plot of vines, which was transplanted from the Paardeberg to L’Ormarins in Franschhoek and to this day is doing just fine – a project entirely overseen by the Rosa and her team.

Just before we wrapped up the judging at the Michelangelo Awards, which was held on the premises of the Lourensford Wine Estate in Somerset West, André came over to lead a special tasting. All the judges, from 20 different countries, were invited and the tasting was dedicated to the old vines that had been submitted to the competition. There were not as yet enough submitted to make this an individual judging category dedicated to Heritage Old Vines with a minimum of 35 years age, but hopefully one day it will become a separate category of its own. 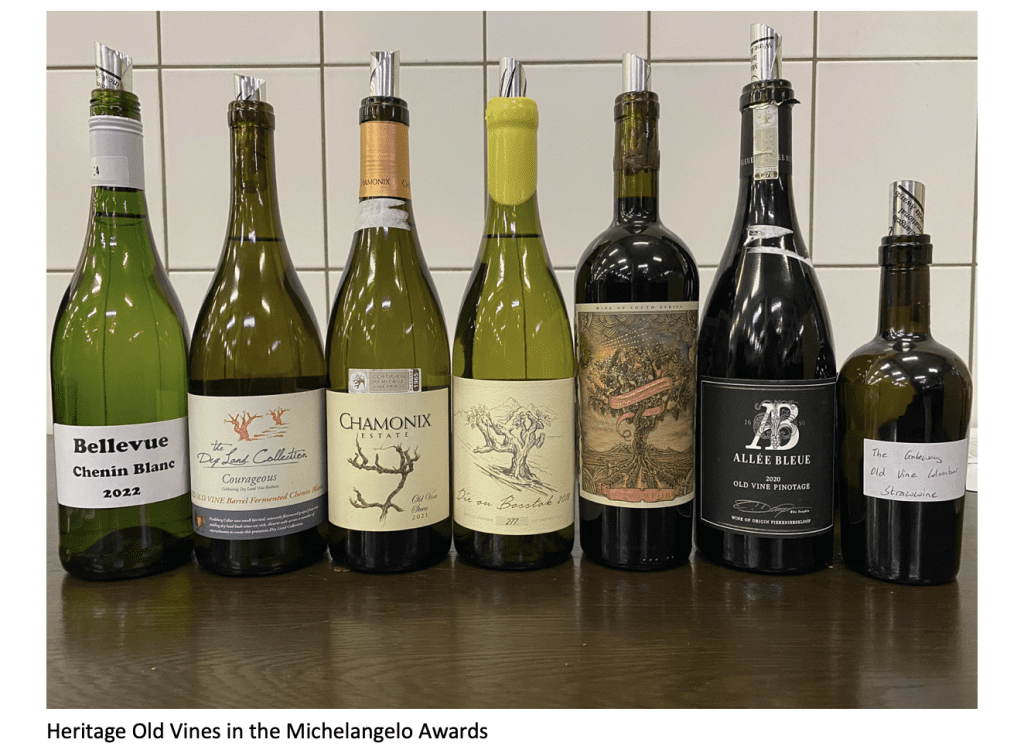 On returning to Italy, where I act as Ambassador to The Old Vine Conference to Italy’s old vines, made me realize that we are just at the beginning of this exciting journey and exposure for old vines, of which Italy has a myriad in all its 20 regions. The Certified Heritage seal offers such a great business model and opportunity, which not only guarantees authenticity and traceability through detailed planting data, but caters to a growing category of passionate consumers, happy to buy into the ‘added value’ of drinking a wine from a heritage old vine with its individual story. This makes it not only a sustainable, cultural experience, but a viable commercial project and something many other regions with old vines could and should follow.